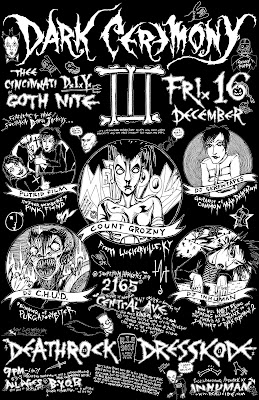 Friday 16 December
at Jonathan Harker's crib, right by where Count Orlock is moving to!
2165 Central Ave. Cincinnati
(go onto Kindel Ave. and find the purple door with fish skeleton painted around it and #2165, call one of the creatures inside to be let in!)

COUNT GROZNY! (from Luciferville, KY)
DJ SKREWTAPES (guitarist of Common Man Damnation)
DJ C.H.U.D. (drummer of Purgatorybiter)
PUTRID FILM (sinister members of Pink Fiend, etc.)
&
DJ INHUMAN (who will NOT be drinking alcohol during the event as a thanx to the survivorz of Dark Ceremony 2)

DEATHROCK DRESSKODE
That's fucking right, don't try to act like you didn't know. Dress dismal or we won't let you into hell. And it's really fun in there, just ask anybody who came to the last party. So rock black clothes, excessive makeup, images of creatures of the night, general creepiness like you busted out of a cemetery for the occasion!!!

9pm-1am?!
$3-5 suggested donations = get a screenprinted Dark Ceremony patch!
All Ages The Way It Should Be
BYOB (blood, ectoplasm, or a mixture of both)

...it's like Nightmare Before X-mas except with mass more profanity and way less novelty shit from the mall.