The Genesis of Naming a Genre: Witch/\House 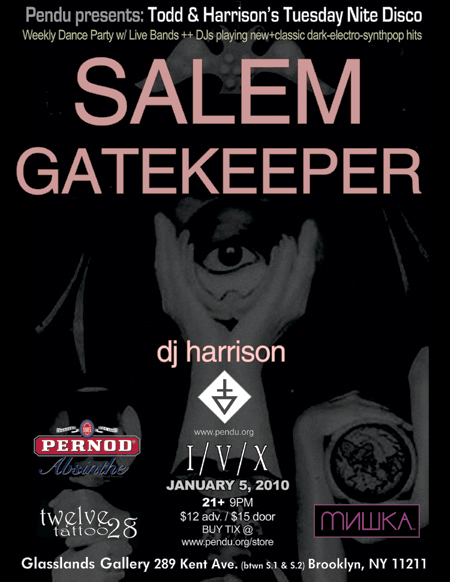 As most Pendu Magazine Readers know, Pendu NYC also puts on music events in various venues throughout NYC including the annual NY EYE & EAR FESTIVAL… and yes over the past year I’ve run a party known as PENDU DISCO booking a lot of artists including Slava, Fostercare, White Ring, Madden, Tearist, White Car, etc. that now fall under the “Witch House” genre but did not have a genre to fall into when the party first started. I still can’t say I’m a fan of the name and I still have yet to use it in any kind of promotional material of my own… but it does appear it’s here to stay and as someone who has witnessed this genesis first hand and has promoted many of its artists, I thought I should write a bit about what I’ve seen happen as this genre has grown. I did call it in 2009, as many others did, that 2010 would be the year for dark music but truthfully what does that mean? Dark music has always been here and it’s always been the music I’m most drawn to. Darkness has always been the backdrop for some of the most compelling, beautiful and interesting music… In every genre from classical to folk murder ballads to early rock-n-roll to whatever; you can always find its dark side. There’s nothing new really about dark music, it can’t really be a revival if it never left, can it? Although this new sound is dark, it’s really about how it draws from the present and the past to create something entirely unique to this moment in time that makes it new and this young sound has been building momentum since 2006 toward the explosion that happened at the beginning of 2010. Most of this new scene of dance music pulls from the darker side of hip-hop, shoegaze, industrial, and goth but in completely different ways. And unlike the term Witch House which tries to unify this scene; in actuality this new sound comes from two ends of the spectrum and still splinters into even more… On one side of the spectrum there is the high-energy EBM/Industrial influences and on the other side there is the slowed-down/bass-music influences; both embody a dark aesthetic and heavy atmosphere. Hardly one scene, or is it?

The first PENDU DISCO party happened on January 5, 2010 (aka “I/V/X – The Day NYC Went Dark”) and featured DJ Harrison spinning new + classic darkbeat throughout the night. GATEKEEPER opened the evening and S4LEM headlined… Could not have been a more perfect way to highlight these two newer styles of dark dance music in the same show. SALEM take the slow-n-low bass-heavy juke/footwerk approach while GATEKEEPER take the EBM/Industrial approach with bits of italo and John Carpenter/Goblin-inspired horror-soundtracks mixed in. In my mind, outside of their commonality of creating foreboding doom and gloom, these two can hardly find an easy way to be lumped into the same genre category. How is all of this music classified as Witch House all of a sudden? The story begins…

In 2009, Travis Egedy of Pictureplane and Jonathan Coward of Shams wanted to name their own genre of music and they labeled the music they were making “Witch House”… aka dance music with witchy occult vibes. It didn’t catch on beyond their own use of the phrase until Travis did a “best of” list in late 2009 with Pitchfork Media. He mentioned that 2009 was the start of “Witch House” and that 2010 “will be straight up witchy” and suddenly thousands of readers read the term for the first time. This wasn’t really the beginning though as others have said; something really interesting and different happened here….

Many read over the article without another thought, but there was one individual in particular (obviously not the writer of this piece) who grabbed onto the term and used the internet to spread the germ that created a new genre. In late January of this year, this individual logged on to LAST.FM and tagged 14 artists they saw as part of this dark sound including S4LEM, oOoOO, Clapsclap, Mater Suspiria Vision, Zola Jesus, and more. Last.FM is an internet streaming radio and online catalog of music and it offers an option for individual users to tag artists with literally whatever tag they want. This USER started tagging all these artists that they felt fit a definition of “witch house”. This person also took to several forums posting related artists and their myspace pages. It’s interesting to note that there was nothing “house” about most of the artists this USER tagged on Last.FM and Egedy was specifically referring to dance music that was both “house” and “witchy”. This USER expanded on the term beyond the intended usage which is definitely where the confusion surrounding the term begins. When Egedy first used “Witch House”, he was speaking of what he and Jonathan Coward of the Shams were already doing and he was also speaking toward the future, in hopes that other artists would start playing a new brand of House music that was “witchy”… He was not trying to label every new band with a dark aesthetic to be called “witch house”. His Denver associates in Modern Witch fit the term nearly precisely but they’re one of the few who actually make dance music fronted by a witch. By labeling all new dark acts under the umbrella of Witch House, this one person accidentally hit a chord in the music community, a good one or a bad one depending on how you feel about it all… As of today, November 8, there are 524 people who have tagged artists “Witch House” on Last.FM, so this definitely is no longer a lone wolf project. Now the question is, “Is 524 people a lot of people?” Can they really be responsible for this much discussion? The answer is yes because so many of those people have their own blogs or are writers for magazines and online journals and have a large readership… from those 524 people, thousands and thousands are learning about Witch House and are accepting it as legitimate or writing rants about how much they hate it. A point of interest is that other genre names were out there for the taking all along, but they didn’t catch on. Disaro Records who pretty much built this “house” for nearly everyone involved in this sound didn’t use the term for quite a long time and labels such as Tri Angle are still remiss to embrace it. For a while Mater Suspiria Vision used the terms Zombie Rave and Ghost Drone before they eventually took up the banner of Witch House as well. S4LEM still call their work “drag” while journalists continue putting them in with the Witch House groups. CRE3P used the term “Rape Gaze” on their myspace page purely as a stab of black humor and meant absolutely nothing by it before some journalists tried to use it and caused a minor stir… but the point is, these names didn’t stick, and yet so far, Witch House has…

The point of this whole piece is that something new has happened here for the music world. We now live in a world where genres aren’t controlled by elite media writers or journalists who get to coin new music terms like they did in the past with weak names that we now use everyday such as Shoegaze, Grunge, etc. This may be a good thing… just maybe. In this case, this genre was spread virally starting with one person using tagging as a method to define a genre. Once it was tagged and others had found it, it was a matter of others accepting this genre as a reality and then it became a reality. Fake Genre or Real Genre?; there is no difference anymore. The NYTimes just did an article discussing Witch House, so there’s no going back… There is, however, going forward. These same methods can be used for new genre names, new definitions, or for counteraction… Transformation is inevitable as we move forward and newer sub-genres and newer micro-genres are sure to be around for a long long time. People have been debating the spelling Witch “Haus” over Witch “House” to separate it from “house music” but then why not just call it HexenHaus… as it sounds even nicer, right? …. well, anyway… … Here’s to 2011 the year of ____________. I’m not going to attempt this one. I’m sure someone on Last.FM will figure it out for me and then I’ll have a new article to write. Here’s to the darkness ahead and more great music whatever people decide to call it. I’m still not sure I’ll use the term myself in the future, we’ll see how long it lasts… It’s more important that good music lasts beyond any of this and that genre not be the determining factor in the lifespan of a song.

Below is a flyer for the next PENDU DISCO… It’s going to be a major party!! And for those who have been waiting for someone to put some “HOUSE” into this new sound… You’ll find it here… 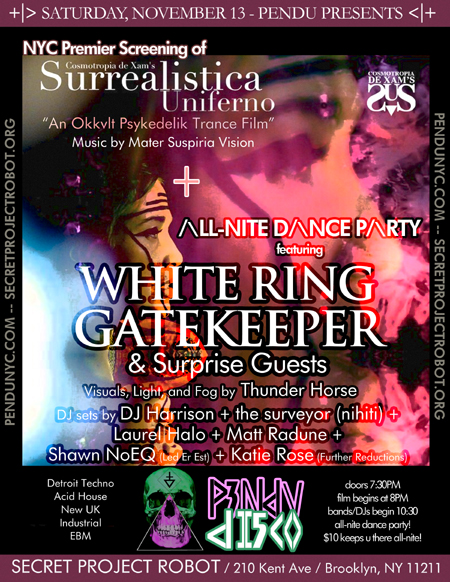 No stops between songs / no stops between bands…. DJ’s will be spinning Detroit Techno, Acid House, New UK, Industrial, EBM …. Continuous Music for DANCING and ECSTATIC STATES of MIND … ALL NITE!